The History of Climate Change 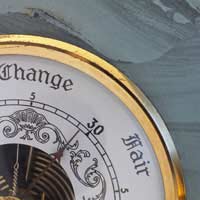 As early as 1753 Joseph Black discovered 'carbon dioxide', a gas that he referred to as 'fixed air' because it is denser than air. In 1824 Jean Joseph Baptiste Fourier first argued that increases in carbon dioxide could lead to a warming of global temperatures, as carbon dioxide forms a blanket in the atmosphere (as due to its density, it does not disperse as quickly as other gases) which traps heat; he compared this phenomenon to a greenhouse. In 1895, Svente Arrhenius first speculated that climate change could be directly linked to human activity.

Increases in industrial activity between the 18th and 20th Centuries greatly contributed to the build up of carbon dioxide in the atmosphere, due to the burning of fossil fuels, such as oil and gas, during the operation of machinery. By the early 20th Century clear rises in global temperatures were evident. Whilst a slight dip in temperatures between the 1950's and 1970's led to a belief that we might be entering a new ice age, temperatures began to rise in the 1970's, and have been rising since then.

Scientists now predict a rise of anything between 1.4 C and 5.8 C over the next hundred years. As drastic as this may seem, it is worth considering the huge climate changes that have occurred throughout the history of the planet, none of them having been man-made. Research has shown that over the last 450'000 years, the climate has demonstrably shifted from 'glacial' (cold 'ice ages') to inter-glacial periods (when it is significantly warmer). It has been noted that these changes often occur over a period of just a few years and not gradually over decades or centuries. For three centuries during the medieval period Europe entered a glacial phase known as the 'Little Ice Age' (around the 15th to 18th centuries) and followed the 'Medieval Warm Period (10th to 14th Centuries) during which time temperatures were abnormally high.

These changes, which have occurred abruptly and frequently over recorded history, could be taken as evidence that current changes in the climate are not necessarily man-made. However, because the effects of climate change of cumulative (a slight increase in temperature leads to further increases, and so on), and because we have evidence to suggest that the release of carbon dioxide in the atmosphere could contribute to global warming, it is essential that we take seriously the threat of climate change and our role in it. The release of harmful man made carbon emissions into the atmosphere could be the tipping point that leads to significant disruption to the environment on a worldwide scale.

Current climate change is often dismissed, as the effects are so unpredictable. What is often referred to as 'global warming' and has produced the hottest summers on record in the U.K. (1998 and 2005) is also responsible for floods, hurricanes and unusually cold spells in the winter. What is known for sure is that, overall, the climate is getting warmer, and the frequency and intensity of extreme weather conditions are becoming more pronounced. This could unbalance the world geo-politically through an increase in natural disasters and decrease in rainfall, leading to drought and famine.