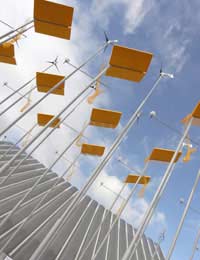 The burning of fossil fuels such as coal, oil and gas is now widely accepted to have a negative effect on the environment through the release of harmful carbon dioxide emissions.

Carbon dioxide emissions are overwhelmingly produced by the energy industries, through the incineration of fossil fuels with 36.6% of all emissions in the UK coming from this source in 1994 (more than industry and residential emissions combined), as opposed to 21% coming from road transport, the nearest other major contributor (according to Defra statistics, 2004).

Of the 'basket of six' harmful gases that the UK pledges to reduce (carbon dioxide, methane, nitrous oxide, hydrofluorocarbons, perfluorocarbons and sulphur hexafluoride), carbon dioxide is the most prevalent and most damaging to the environment. The gases are commonly referred to as 'greenhouse gases' as they are thought to contribute to global warning by collecting in the atmosphere and producing a 'blanket' which will not allow heat to escape. In order to halt and reverse this effect, many people agree that it is essential to minimise, or stop altogether, the use of fossil fuels to produce energy.

Additionally, as there is only a finite supply of fossil fuels, it will be necessary to start using alternative fuel sources as supplies of coal, gas and oil dwindle and prices of these resources rocket, pushing up inflation and causing possible tension in unstable 'oil rich' regions.

Despite the need to reduce fossil fuel emissions there has been reluctance and a slowness to act on the part of the fossil fuel industry. The arguments against developing alternatives to fossil fuel have largely come from within this industry and have been conducted in economic interests.

However, the need to develop alternative fuel is becoming widely accepted by both business and individuals, is enshrined in international, European and national law and is in the long term interests of energy companies who will stand to benefit economically (given the inevitability of fossil fuels expiring) by investing in sustainable energy forms.

The government have undertaken a commitment to strengthen renewable energy resources in line with the European Conference for Renewable Energy (2004) proposal declaring that Europe should source 20% of its energy from renewable/sustainable sources by 2020.

There are a range of renewable and sustainable energy alternatives with both benefits and drawbacks.

Nuclear power is, arguably, not renewable as it is sourced from mined lithium, uranium and thorium. It also criticized for being too dangerous, following accidents at nuclear power plants in Three Mile Island (1979) and Chernobyl (1986). Additionally it is argued that nuclear waste is highly dangerous, difficult to dispose of and does not contribute to a wider sustainable lifestyle strategy. The Labour Government has committed itself to the development of new nuclear power stations.

Whilst debates develop regarding the future of energy production, he need to operate a renewable or sustainable supply is no longer in question.