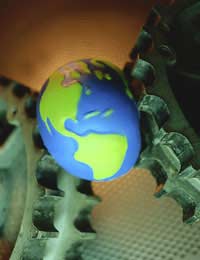 Prime Minister, Gordon Brown, has been quick to highlight the importance he places on tackling Climate Change, unleashing his new plan for a 'green hotline' in November of this year. The hotline aims to give U.K. residents a simple one stop number to call for all of their climate change needs - including advice on how to cut the carbon footprint.

The Prime Minister made a famous speech in 2005, when he was Chancellor of the Exchequer, highlighting the need for economic policy to be aligned with sustainable policies that are positive for the environment. In keeping with this he is remarkably ambitious with regard to the cutting of greenhouse gases, claiming threat the U.K. may cut greenhouse gases by 80% by 2050, instead of the initially agreed 60%. Many critics point out that we are nowhere near our targets to cut carbon emissions by 20% of their 1990 levels by 2020 (agreed under the Kyoto Protocol on Climate Change).

Gordon Brown argues that Britain should be at the forefront of Climate Change in the world, and that this change should come about with the development of new more efficient technologies. Some critics argue that waiting for new technologies to be developed is no substitute for severely limiting our current use of carbon emissions by avoiding car and plane travel and taking other lifestyle measures to reduce carbon emissions.

Brown has backed full the development of Nuclear Power, even though such development will take 15 years before being ready to supplement our high carbon energy output. This 15 year gap may be too long to wait, it is argued, if we are to significantly reduce our carbon footprint.

The pushing of greener homes is seen a positive step by Brown, who says he will find financial support for those living in the poorest areas, in order to make their homes more energy efficient. Yet it is felt in some quarters that too much emphasis is put on the home owner and consumer to reduce their carbon footprints, whilst little is done to tackle these problems at the top: Costly wars, and unnecessary air passenger and freight transport are having their impact on the environment, but go relatively unchecked, possibly because of the influenced that large interests hold over the government.

Gordon Brown has also suggested that countries such as Japan, the U.S. and the U.K. should develop a climate change network to support developing countries in finding effective ways of advancing technologically without having more carbon emissions. This acknowledgment of the problems that have arisen as a result of increasing affluence and growth in Brazil, China and India (see related article: 'India and China - The Impact of Modernisation') is a wise one. However, changes in lifestyle will have to be seen as occurring in the developed West before developing nations are convinced of the benefits of new technologies. The biggest task that Gordon Brown perhaps faces (besides reducing carbon emissions in the U.K.) is to persuade the U.S. to take seriously the threat of Climate Change. The recent compromise deal struck in Bali to address the reduction of admissions after the Kyoto Protocol expires suggests that the U.S. is not yet ready to address the pressing issues surrounding Climate Change. As with so much, everything depends on what influence the U.K. Prime Minister can exert on the attitudes of the White House.