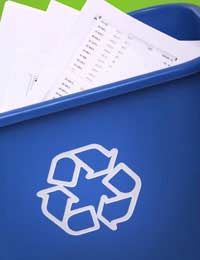 For some people, recycling has become a part of the daily routine, it is, by now, for many of us as natural to separate waste into recyclable and non-recyclable as it once was to simply put waste in the bin. However, there is still a division in Britain between those that 'do' and those that 'don't' recycle. For those that do, the benefits of recycling will be clear. For those that don't recycle, or simply don't do enough of it, it may do well to bare in mind the following points:

Government statistics show that nine out of ten households would recycle more if the facilities were more readily available. Whilst this highlights the governments duty to make recycling easier for the individual, it also points to a lack of individual responsibility. Those that don't recycle really should take it upon themselves to protect the environment they live in. Those that do recycle can actively encourage others to do so by:For further information of how to recycle household waste see related article.
Next Page

Recycling at Home: How to Slim your Bin