Home > Food and Drink > Grow Your Own 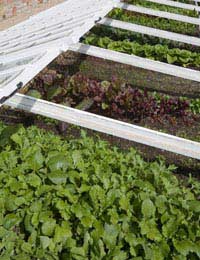 Growing your own produce is becoming hugely popular in our ecologically conscious era. Growing vegetables and fruits at home cuts down on fuel emissions and enhances organic, simple, sustainable living.

Growing your own can be challenging if you are new to gardening, but with a little effort and patience you will soon be rewarded with healthy, sustainable produce.

Starting off - A Sustainable Crop

In order to grow a truly sustainable crop that puts you at least part of the way to self- sufficiency it is necessary to grow a selection of herbs and vegetables wide enough to sustain your culinary and dietary needs. The following selection should be adequate for most of your requirements:

Basil, Coriander, Rosemary and Thyme, like many other herbs, will return yearly once planted. Therefore, for a relatively low cost you will have an inexhaustible supply of these versatile herbs.

Once planted, the following will grow back year on year and can all be planted in autumn/winter for a summer crop.

In consideration of the above points it is possible to design a garden that will produce a good crop throughput the year. It is important to have the right mixture of summer and winter harvesting foods and to plan so that crops can follow one after the other (as, for example, with runner beans which can be planted directly in place of harvested broad beans.)

Even in a small city garden it should be possible to grow some of the above, reducing the need to shop.

If you are going to take sustainable living seriously you will want to grow organic and this will involve devising strategies to keep your produce pest free without the use of chemicals. Some varieties of fruit and vegetable are more disease and pest resistant than others, so go for these where possible.

'Companion planting' is a popular way to protect your harvest. Different species of plants are twinned (hence 'companioned') to benefit their growth. For example, to ward off greenfly you can plant Marigolds near your crop: Marigolds attract hoverflies - a natural predator of the greenfly.

You can also ward off pests and diseases by rotating your crop. By changing the positions of your vegetables and varying your crop regularly you will prevent communities of pests or strains of disease building up, as different diseases and pests are reliant on different plants.

Weeds can be suppressed by covering the ground in a 'mulch' - a layer of straw or wood that will smother their growth. Regular 'weeding' is vital and can provide a good source of material for composting.

Compost is used as natural supplement to garden soil and good compost will aid the growth of your crop. It can be made by blending a mixture of dry waste, such as straw, shredded wood and dried leaves, with wet waste such as green leaves and freshly cut grass. The waste is deposited in a simple enclosure (made of an old bin or palette) and must be turned regularly to allow air to get to the mixture and aid decomposition. Compost is preferable to the use of peat, which is harvested from natural peat habitats, thus damaging the environment.