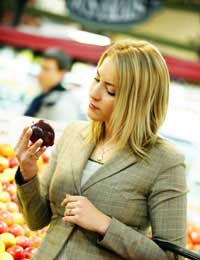 Supermarkets have come in for heavy criticism from interest groups promoting sustainable living. Not only is the experience of shopping itself arguably downgraded, as large companies aim to 'pack 'em high and sell 'em quick', but products are compromised as ever cheaper and more standardised products are produced, in the interests of competition. Additionally, supermarkets take business away from smaller local enterprises, and tend to import from abroad in large quantities. Policies such as this conflict with the principle of buying organic, local produce, in a bid to help reduce carbon emissions.

Greenpeace directly criticise U.K. supermarkets for selling threatened fish species and urge them to sell seafood from sustainable sources only. Supermarkets are also criticised for stocking, and thereby promoting the development of, genetically modified (G.M.) products.

Some people may wish to boycott supermarkets completely in an effort to lead a fully sustainable lifestyle. Although all major U.K. supermarkets have undertaken promises to remove G.M. products, campaigners from major pressure groups point to some major problems with this:

However, it is beyond doubt that major supermarkets are making significant efforts to curb G.M. stocks, even despite their being no evidence of inherent dangers in eating G.M. food and now law to prohibit its sale. This is, if anything, a major success story for consumer power. In order to further this success it is possible to sustain pressure on supermarkets by:How you decide to shop for a sustainable lifestyle is a matter for personal consideration. However it is important to have information at and from a wide range of sources before you can make an informed decision. Once you have considered the position of environmental concern groups, it may be worth considering the position of individual supermarket chains that are making efforts to promote sustainable living. Here is an overview of their policy to get you started:It is also worth bearing in mind that many products other than food items are dangerous for the environment (see related article: 'Protect Against Hazardous Chemicals'.) Supermarkets are not yet under as much pressure to address problems with products that contain harmful chemicals (such as cleaning products and toiletries) as they are to address issues concerning food. Customer boycotts of hazardous products may push supermarkets to make further changes.