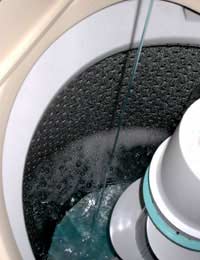 Rainfall and reservoir supplies are undoubtedly in shortage in comparison to levels recorded since records began. Many people feel that this is due to global warming and there is widespread concern that if global warming continues at its current level, or increases, their will be significant water shortages worldwide, resulting in a water famine in, at the least, the hottest and driest parts of the world.

As rainfall has been so short in recent years, resulting in a public drought order being issued in England and Wales for the eleventh time since 1990, saving water has become a high priority for environmentally conscious individuals, institutions and companies.

Saving Water in the Home

There are many ways that individuals and households can save water, thus contributing to a healthy and sustainable environment. Turning the tap off when you brush your teeth can save up to five litres of water a minute. Across the entire UK enough water could be saved in this way to supply 500'000 households, or 1.2 million people per day. Here are some further ways that you can save water:

Whilst it is important to save water at home statistics show that there is a great deal of water wasted in the workplace as well. 'Envirowise' promoted 'Water at Work Week' in August 2006, arguing that if businesses placed litre bottles of water in all of their toilet cisterns, they could help to save up to 132 million litres of water daily, as part of a nationwide scheme. Initiatives such as this demonstrate the impact that small behavioural changes at work can have on the environment.

Much water is wasted along the supply line, both through faults in reservoir beds and cracks in water supply pipes. 'The new European Water Policy: River basin management, Water Framework Directive (200/60/EC)' was devised to address faults in the management and supply of water and has been implemented under national law since 2003. Water companies now have to adhere to strict standards and can be fined if they do not address wasteful inadequacies in their infrastructure. The Water Act of 2003 obligates public bodies to strive to save water wherever possible. The government backed 'Waterwise' scheme has been setup to advise public sector groups how best to achieve this.

Saving water is set to become a prime concern for businesses and individals over the coming years. At the moment, EU and UK government policy on water falls far behind policies that aim to reduce harmful carbon emmissions. If we are to live in a sustainable and healthy environment, individuals, corporations and governments must make greater concerted efforts to reduce water consumption.

How to Make the Most of Rainwater