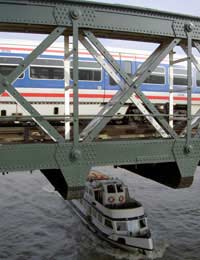 Public transport is an energy efficient way of making journeys that cannot be walked or cycled. The increased use of public transport to make middle and long distance journeys, coupled with an increase in walking and cycling for short journeys would significantly help reduce carbon emissions in line with government targets.

Using public transport is something the vast majority of people do at some point. To minimise carbon - and other harmful - fuel emissions it is important to use public transport as much as possible when it is the most viable option. This will involve looking at your current transport habits and drawing up a workable alternative programme of travel. Where you find it hard to avoid using a car, try offsetting this by cycling and walking for shorter journeys wherever possible.

A full bus or train clearly consumes less carbon than 50 - 500 separate cars; this in itself means that using public transport will help to reduce fuel emissions. Record amounts of investment are being poured into public transport to make it a safer and more appealing option for the commuter. This is part of wider government plans to reduce harmful fuel emissions by 20% of their 1990 levels by 2010.

Steps are also being taken to actually reduce the carbon output of public transport systems. The government have already implemented plans to run Hydrogen buses on certain bus routes, with 6 hybrid electric buses on trial between 2005/6.

It is also worth bearing in mind that electric trains, trams and tube trains will become considerably more sustainable as a means of transport once more electricity is supplied from sustainable energy sources. The government is investing in initiatives to help achieve this.

The multi faceted government policy on public transport (Climate Change - The U.K. Programme 2006), which also includes a public education programme, is ambitious in its scope. It is beyond doubt that initiatives such as higher taxation on petrol and diesel than sustainable fuel and the London congestion charge have had positive effects on the environment. However, as the government paper points out, higher levels of mobility generally coincide with increases in wealth; with a steadily growing economy and more demands on the transport infrastructure, significant measures need to be taken if real reductions in transport emissions will be realised.

The EU have proposed measures which will oblige private funded public transport operatives to invest 25% of their income for new fleet vehicles over 3.5 tonnes into systems of sustainable transport. Effectively this would entail 25% of all new buses running on sustainable forms of energy. The EU are planning a major transport awareness initiative in 2008-09.

With government and EU initiatives in place, there is reason to be positive about public transports role in helping to reduce fuel emissions further. However, much of this will be dependent on the behaviour of the individual until all public transport runs on fully sustainable fuel.